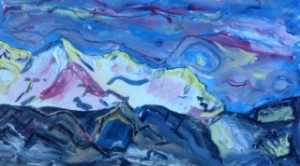 The silent mountain is passionate

Mirabai Bush talks about contemplative seeing, ‘the mindful study of painting and sculpture as ‘beholding” (which involves appreciation, care, the involvement of our senses). We are able in beholding to ‘hold’ something in our attention until something emerges into our awareness.

Taking time to behold means that time can open up and we can have a moment of clear seeing, an epiphany.

Paintings like poetry can shift our mental gears from doing to being, from thinking to awareness, from autopilot to mindfulness, from self-preoccupation to contemplation of God, which becomes love for others and the creation around us.

Step out of clock-time for one minute and focus your attention on the painting. As your mind wanders allow yourself to become aware of the noise in your head, the afflictive thoughts, the self-preoccupied narratives. Allow the volume on those thoughts and feelings to be turned up. Become aware of the silence in the painting. You can click on the picture to make it bigger.

As I was praying this morning I came across this painting I had done in France a while back. As the rain beat down outside, and it looked like we wouldn’t see the sun today I suddenly wanted to be in this bright summer place in France. But then I also thought: this is a picture of what my inner sanctuary could look like. My inner sanctuary doesn’t have to be grey like the external world was this morning.

How do we create this inner sanctuary? If you want a good book to begin, read Father Christopher Jamison’s ‘Finding Sanctuary’ (see attached link). What are some of the building blocks? Virtue…silence…meditation and contemplation… 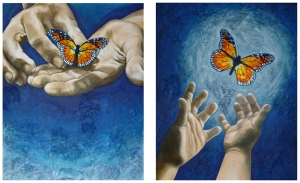 Hope in fragility through patient waiting

In his book The Mindful Brain Daniel Siegel writes, ‘Poetry, like silence, creates a new balance of memory and moment. We see with fresh eyes through the poet’s artistry, which illuminates with words a new landscape that before was hidden beneath the veil of everyday language.’ (p54).

I think this is also true of art, which helps us to move from a clouded thinking to a new awareness, moving from thinking to the streams of awareness in our minds.

So step out of clock-time for 3 minutes and just look at Natalie’s painting. If your mind wanders, notice what it wanders to and bring it back to the painting. Pay attention to what comes into your awareness. Write it down.

This is what Natalie says of this painting:
‘PATIENCE’

This painting was based on an image someone had for me of a butterfly emerging form its cocoon too early – when it was not yet ready. God was holding it in his hands, stroking its wings, waiting for them to dry. It had to be patient while God dried its wings – if released too early the butterfly wouldn’t be able to fly. Something big and spectacular will come but you have to wait patiently – it cannot be rushed. Trust in God’s timing, not your own. Be patient while God ‘dries your wings’…

What I love about Natalie’s paintings is their texture, they invite you reaching out and touching them. Have a look at some of her other paintings on the attached Facebook link. Too often art is hidden away behind glass and barriers. I feel if I touched the butterfly I would come away with wingdust on my fingers.

As I gazed at the painting I was reminded that it is alright to be fragile. An experience of when I felt I was falling apart, and someone was able to hold me until my wings dried, came to mind. In the patient waiting of fragility, the painting also gives me hope.

(These is some details about Natalie:
The side of God that I find easiest to relate to is God the creator and artist. When I took a year out in Australia I used to walk along the beach each morning and marvel at how the scenery, colours and texture would change so much from day to day. I would imagine God ‘painting’ the scene – each day a new and exciting canvas – and as I walked I would say to Him “loving your work today God”. It was at these times that I felt closest to Him and most at peace. I try to capture glimpses of the incredible beauty of God’s creation in my paintings – nature being the ultimate inspiration. I work primarily in acrylics on canvas, often adding texture through mixed media. Having completed a degree in Surface Pattern design I also enjoy working with textiles, designing and making clothing, cushions, bedding and wall art, amongst other things.

We can become mindful through looking at art, reading poetry, becoming a carpenter, fishing – being a poet, or artist.

One such artist who can help us journey into a state of greater awareness is Odilon Redon, the French Symbolist.

ODILON Redon the French Symbolist (1840-1916) shows us in his paintings the spiritual reality underlying our material reality. Although that spiritual reality is veiled and ambiguous, Redon enables us to see through the physical to the spiritual beyond. Redon achieved this through his use of symbol in the mysterious world of dreams and the subconscious.

I recently had the privilege of visiting the recent exhibition of Redon’s work at the Grand Palais in Paris (23 March- 20th June 2011). This is apparently the first major exhibition of his work in Paris since 1956.

Although I have been drawn to his pastels by their ecstatic use of colour, this exhibition traces the development of his work from the beginning of what is called the Noirs, charcoal drawings and lithographs, through to the luminous vibrancy of his later pastels.

What is brought together in this major collection of over 170 pieces is the shadow side of our humanity and the light that also inhabits us. A religious experience and a serious illness in the 1890s brought out this explosion of colour in his work which had until then lain dormant.

The paintings are often spiritually evocative although never labelled as ‘religious’. In this way their appeal would be to all who love art.

The centrepiece of the exhibition was a painting called The Golden Cell (1892). You gaze at a mysterious yet still and peaceful cobalt blue profile of a face, eyes closed, painted over a metallic gold background, much like an icon. What is striking about the painting is the unrealistic use of colour – a blue face. Blue here is seen to be symbolic of holiness.

Another painting of a still but attentive face is called Closed Eyes (1890), this is a recurring theme, and believed to be the transition point between the Noirs and the later vivid colour. If part of the reason for art is for us to experience something, as it was with stories in an oral culture, then these are paintings that create a yearning in us for the peace that is being portrayed before our eyes.

Another key painting that lies at the end of this journey into stillness is called The Silent Christ (1911), or perhaps even better, The Silence. This is not the silence of Christ before Pontius Pilate, or his silence on the cross, but the silence of his contemplation in communion with his Father – which is the silence. Paradoxically, although Christ’s eyes are closed, this is a watchful face, not the watchfulness of anxiety and suspicion, as characterizes so many faces in the twenty first century, but the watchfulness of love and trust. This is interesting as Jesus talks much about watchfulness in Mark’s gospel – a concept that overlaps with modern ideas of mindfulness.

Even in the earlier charcoal and lithograph pieces, with their weird and anguished themes of smiling spiders, and plants with human heads, there is still the attempt in drawings of angels and demons to show light and dark through a mastery of the technique of chiaroscuro. The French term clair-obscur brings out the tension that lies within all of his work, clarity and hiddenness are woven together.

The one theme that is missing from this collection is a greater representation of the ‘mystical boats’, a  series of sailing boats with mysterious passengers and elusive destinations – but still infused with the colour of hope and faith. These paintings encourage us not to remain anchored in an imaginary safe harbour, but to sail through the shadow into the light beyond. Perhaps, most encouragingly of all, Redon’s work draws out the spiritual which lies dormant in so many people. It is there where his importance lies.

Error: Twitter did not respond. Please wait a few minutes and refresh this page.