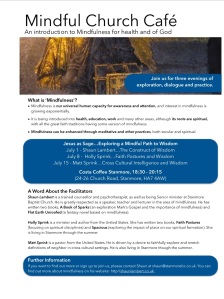 mindful of one thing

In the early church an Abba or an Amma (spiritual father or mother) would give a beginner a maxim to think about, and be mindful of all day (including memorizing it). This is wisdom not information.

For example, ‘Want to possess nothing with as much desire as those who want to posses everything.’ Diadochus of Photike (5th century).

Speaks to our materially possessive world.

END_OF_DOCUMENT_TOKEN_TO_BE_REPLACED

In J. K Rowling’s first book Harry Potter and the Philosopher’s Stone orphan Harry looks into the Mirror of Erised and sees his parents. It is a mirror that shows the deepest and most desperate desire of his heart (Erised = Desire). It is a mirror, that his headmaster, Dumbledore tells him, shows ‘neither knowledge or truth.’ In fact many have wasted their whole life sitting in front of that mirror.

Paul uses the image of a mirror in the first book to the Corinthians, and James the brother of Jesus also uses the idea of a mirror – but this is the mirror of truth, the living book of Scripture.

‘But the man who looks intently into the [mirror of the] perfect law that gives freedom, and continues to do this, not forgetting what he has heard, but doing it – he will be blessed in what he does.’ (James 1:25)

James talks about this metaphor in the context of addressing anger. Anger is one of the afflictive thoughts identified by the Desert Fathers and Mothers as most destructive of community. We often feel guilt and shame for the anger that grips us and that we indulge. Paul tells us something helpful in Ephesians 4:26, he says ‘In your anger do not sin.’ The feeling of anger is itself not a sin, but what we do with it often is.

With that in mind what does James want to tell us? The first thing he tells us is that ‘Everyone’ is to be ‘slow to become angry.’ (James 1:19). The word ‘everyone’ is used a lot to address important issues in the Bible – and I talk to many Christians who want to qualify this and say ‘everyone…but me.’ They are somehow the exception to the rule, the person who doesn’t have to tithe, live in community, be chaste in their sexual practice and so on.

Anger is one of those issues where many Christians wish to qualify that direct biblical teaching. Why does James say that we must be slow to become angry? Because we are usually very quick to become angry. On my smartphone I have an icon for a game called ‘Angry Birds’ – it is a shortcut that goes straight to the game. On many of our chests we have an ‘angry man’ or ‘angry woman’ icon – which is easily pressed and provides a short-cut straight to the land of angry.

If we are to be slow to become angry we must learn to slow down the chain of thoughts that make up the shortcut in our psyche. The Desert Father and Mothers called these chains of thought logismoi. I’ll say more about that in part 2.

But the question is are we going to deal with our anger or not? Suppressing it is not the answer, nor is indulging it. There is another way.